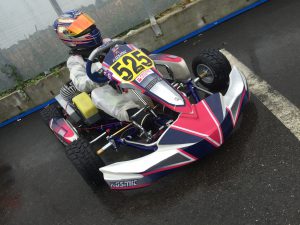 Coertze getting ready for a wet practice session

The past month saw numerous SA drivers compete in karting events in Italy. 11 year old Grade 5, Sunridge Primary School pupil,Joshua Coertze was one of these drivers that took on the challenge. Being crowned the 2016 Mini Rok South African Champion he was one of the qualifying drivers to represent South Africa in the ROK world finals at the South Garda Circuit in Lonato Italy.

In addition to the ROK World Finals, he opted to also take part in the Autumn Cup, open to international drivers and consisting of two race weekends prior to the scheduled World Finals later in October.

Some of the best drivers in Italy and surrounding countries take part in the Autumn Trophy and the first weekend proved to be a steep learning curb as the track configuration had changed since his last visit. This meant that there was no technical data to work with. The first week however, delivered solid results with a 7th place finish in the pre-finals and 15th in the final.

By the end of the second week’s qualifying Josh and team managed to secure a 18th position 0.3 sec of pole position. 1st  to 60th were all lapping within 1 second of each other. Once the dust settled after  the pre-finals Coertze  managed to work himself to 7th position in his group. After a very physical and fast paced final race he managed a well driven 14th place.

Coertze’s performance and consistency in continuously changing weather conditions during the two weekends earned him an overall 4th place in the Autumn Trophy, out of the 76 drivers that entered the two round event.