After showing good pace in the Autumn Trophy  and with some more testing sessions thereafter, young Coertze was heading into the ROK finals event with lots of confidence. During the practice sessions leading up to the weekend he was consistently in the top 5 fastest in group regardless of track conditions. By the morning of qualifying him and his team (RKT / Ward Racing) managed to set his kart up perfectly and in official warm-up he managed to set the fastest time in his group and was in the top 10 of the 171 drivers.

But, it was no 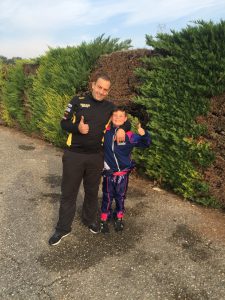 t meant to be. After the rain cleared up and the official results posted, Coertze only managed P115 from a field of 171 drivers. An unexplainable and devastating result to the young driver knowing that to make into the Final; top 8 finishes in each heat was the minimum ask. Despite making up a total of 30 places through out the heats and through pure determination, he ended 2 points shy of making it into the B-final event.

“I’m disappointed I couldn’t make it into the Final. So many people have supported me through the year, the team and my mechanic Nazza, who didn’t hold anything back and did all he could. It would’ve been nice to have made it through for everyone and to have fought for the top spot with the world’s best.”said a disappointed young man, but yet still determined.

More determined than ever, 11 y/o Coertze now has his focus set on the last round of the Northern Regions Mini ROK Championship where he’s been leading from the onset of the 2016 season and still holds a narrow lead in the class over recently crowed Rotax Mini Max World champion, Jayden Els.

A battle Royal is expected.